In announcing my bid for re-election as Alderman of Springfield Ward 6, I would like to start with one issue that should sum up your voting preference to re-elect Henry Clay Sneed for another term. 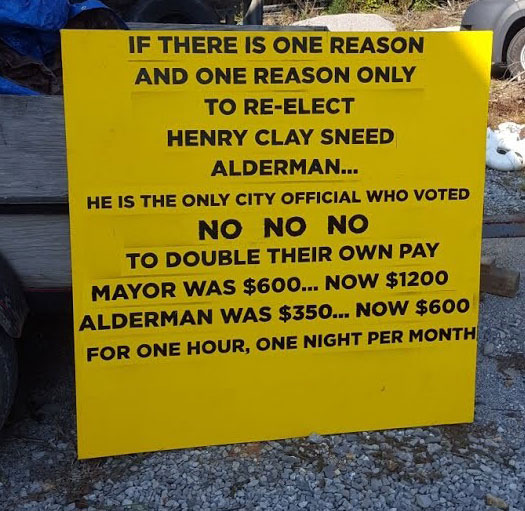 Currently the Springfield City Mayor is payed $600 per month and the Aldermen are paid $350 per month.  After about 15 months on the job in the Spring of 2018, a motion was made by Alderman Harris to increase the monthly pay for the elected officials. The new pay per Alderman Harris’ motion would be $1,200 for the Mayor and $600 for the Aldermen.  The vote was swift at 6 to 1, with little debate and even less media coverage.  Henry Clay Sneed was the only one on the board to vote against it.  Was it too much?  Yes!  We only meet one day a month for about 1 to 1.5 hours.  How much do you make per hour?

Please VOTE to keep integrity and at least one on the City Board of Mayor and Aldermen who at least acts like they care about you and the City of Springfield.